Stephen Towns: Declaration & Resistance examines the American dream through the lives of Black Americans from the late eighteenth century to the present time. Using labor as a backdrop, Towns highlights the role African Americans have played in building the economy, and explores how their resilience, resistance, and perseverance have challenged the United States to truly embrace the tenets of its Declaration of Independence.

Towns has created paintings and story quilts that expand the historical narratives of enslaved and free people who toiled under the most extreme hardships, yet persevered through acts of rebellion, skillful guile, and self-willed determination. Within this arresting body of work, Towns also shows the beauty and love that Black people possess beyond the grips of White supremacy. 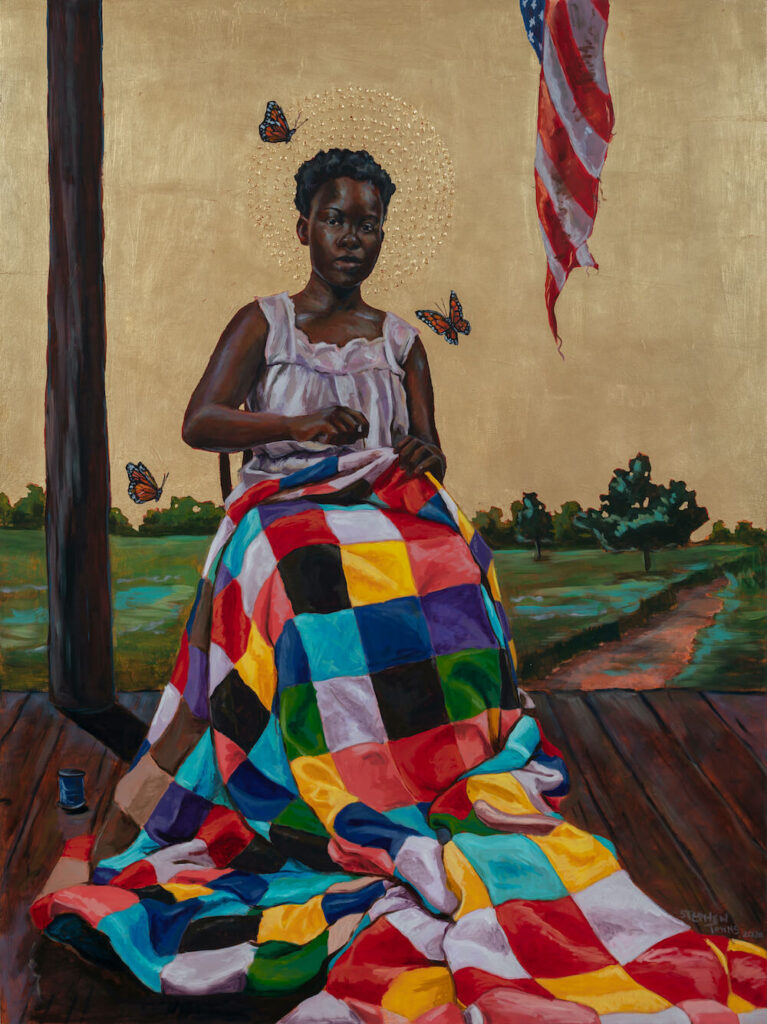 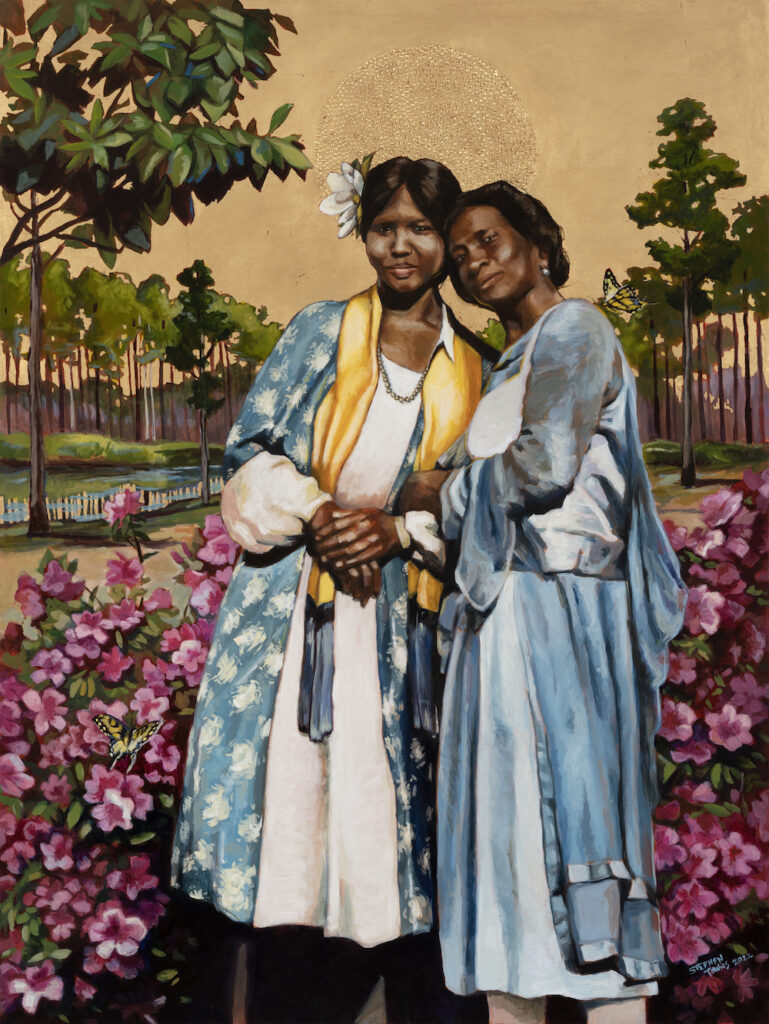 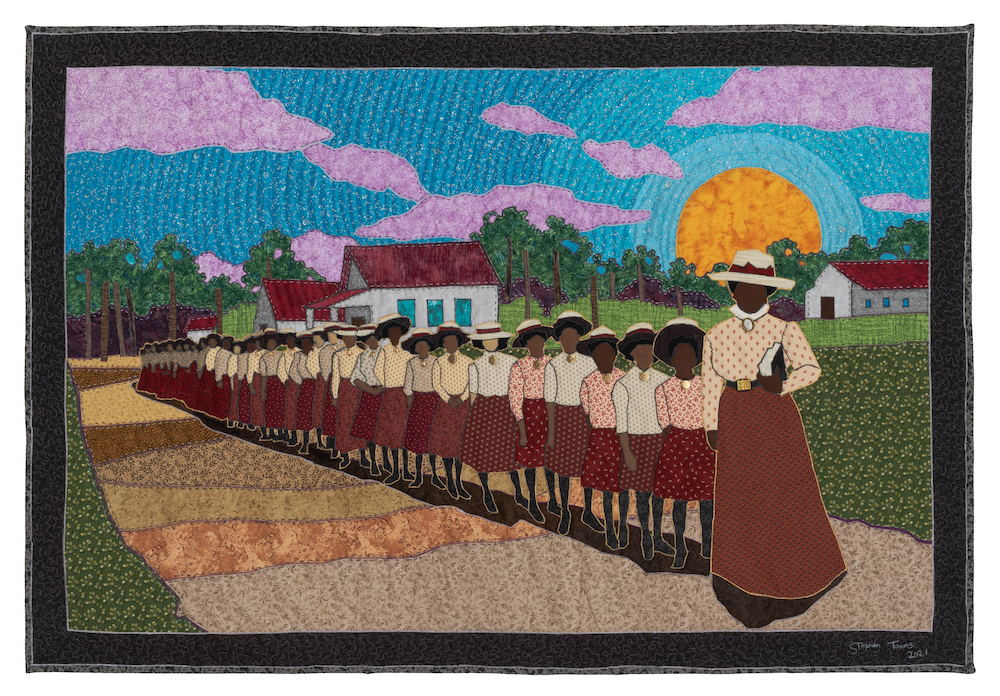 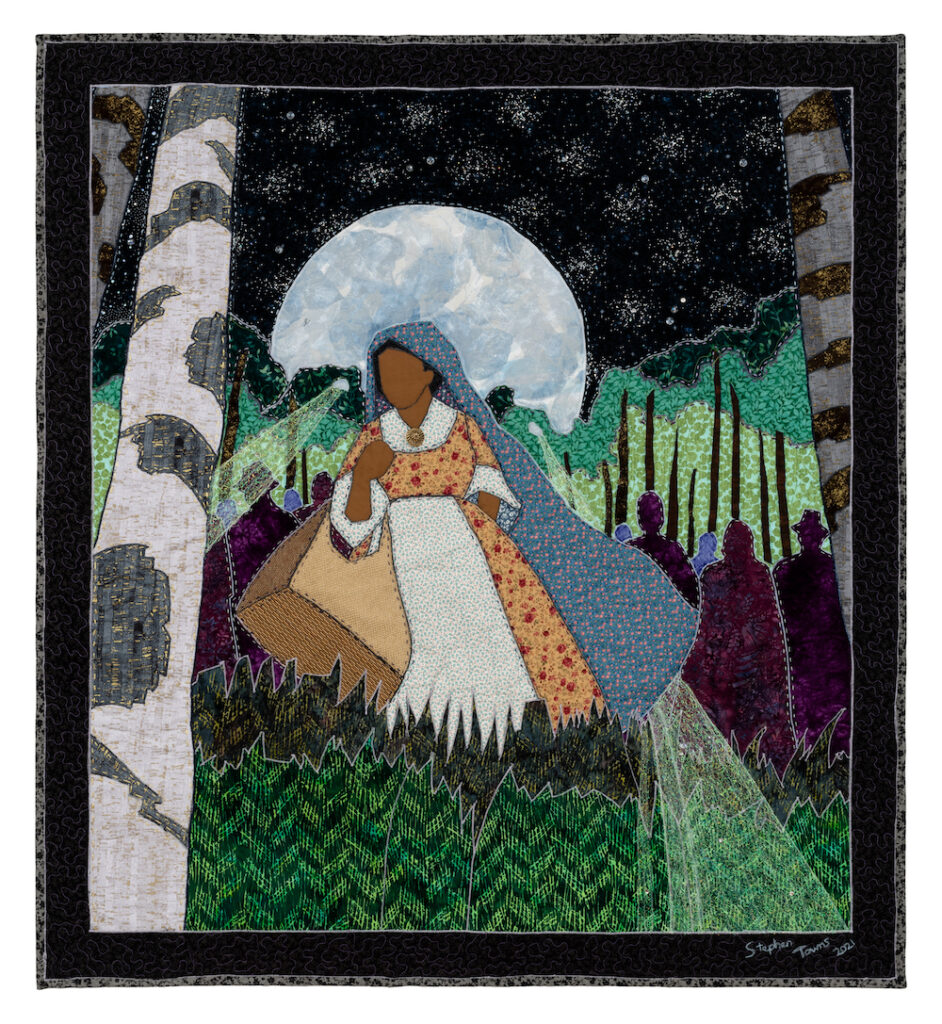 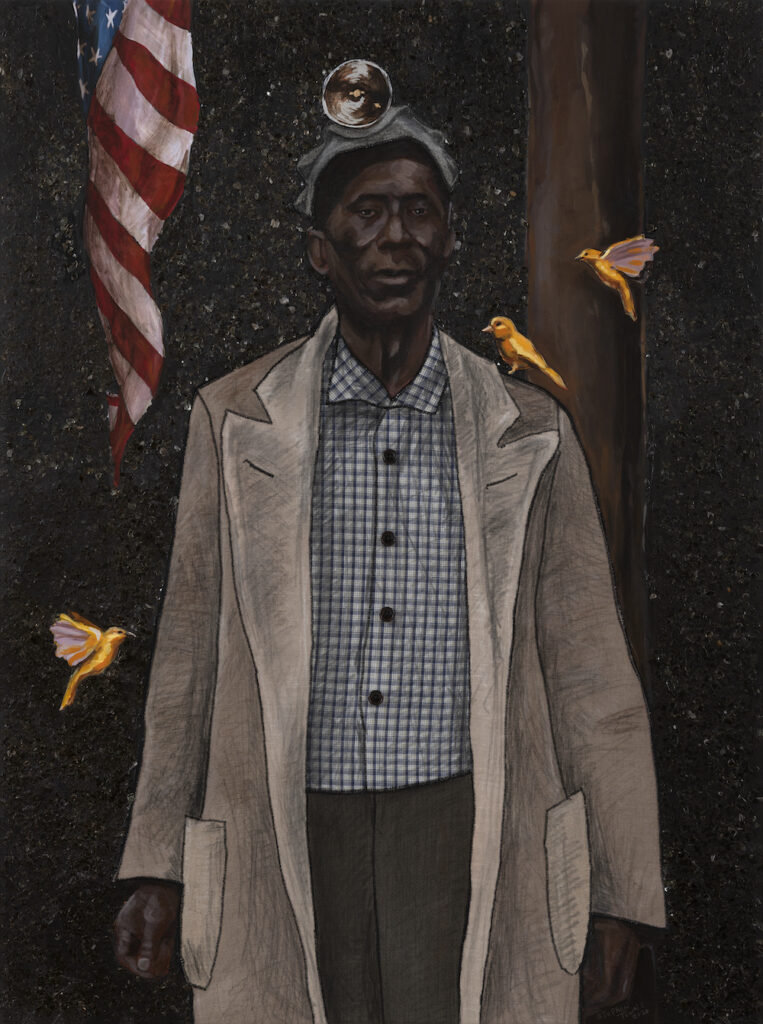 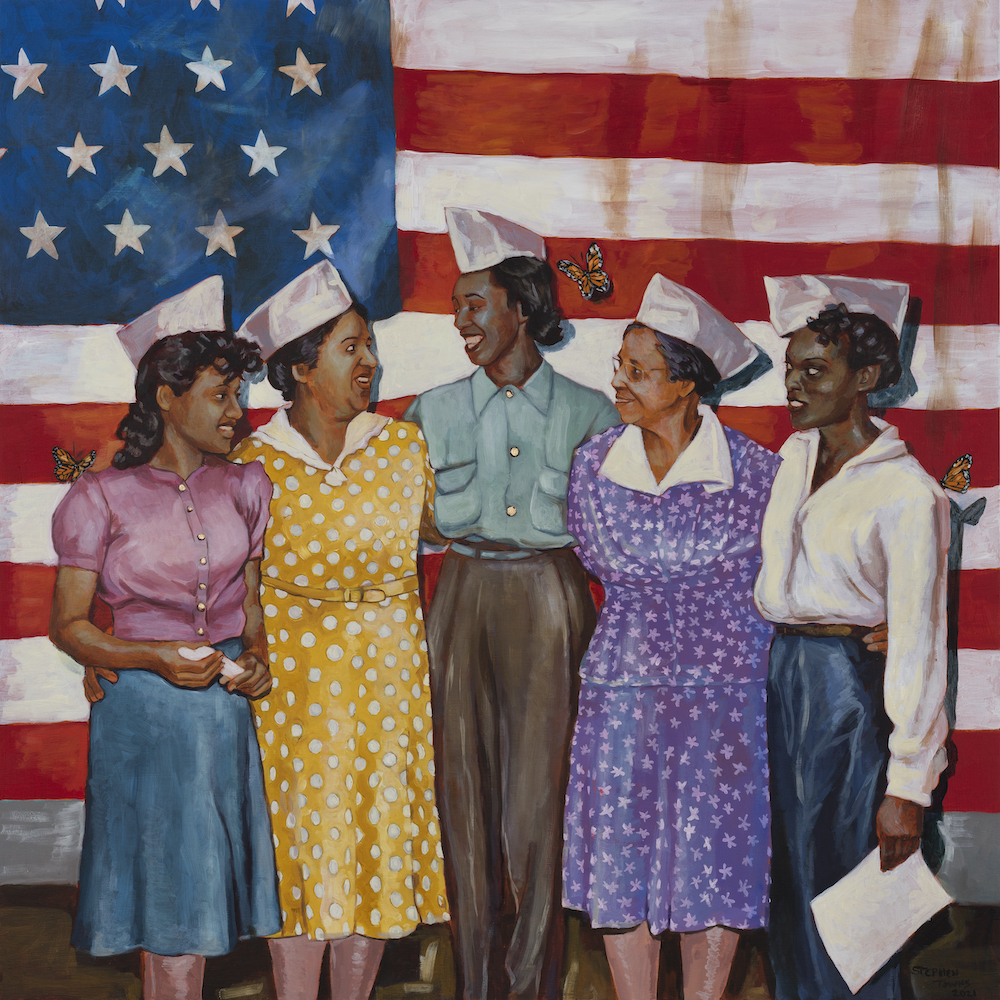 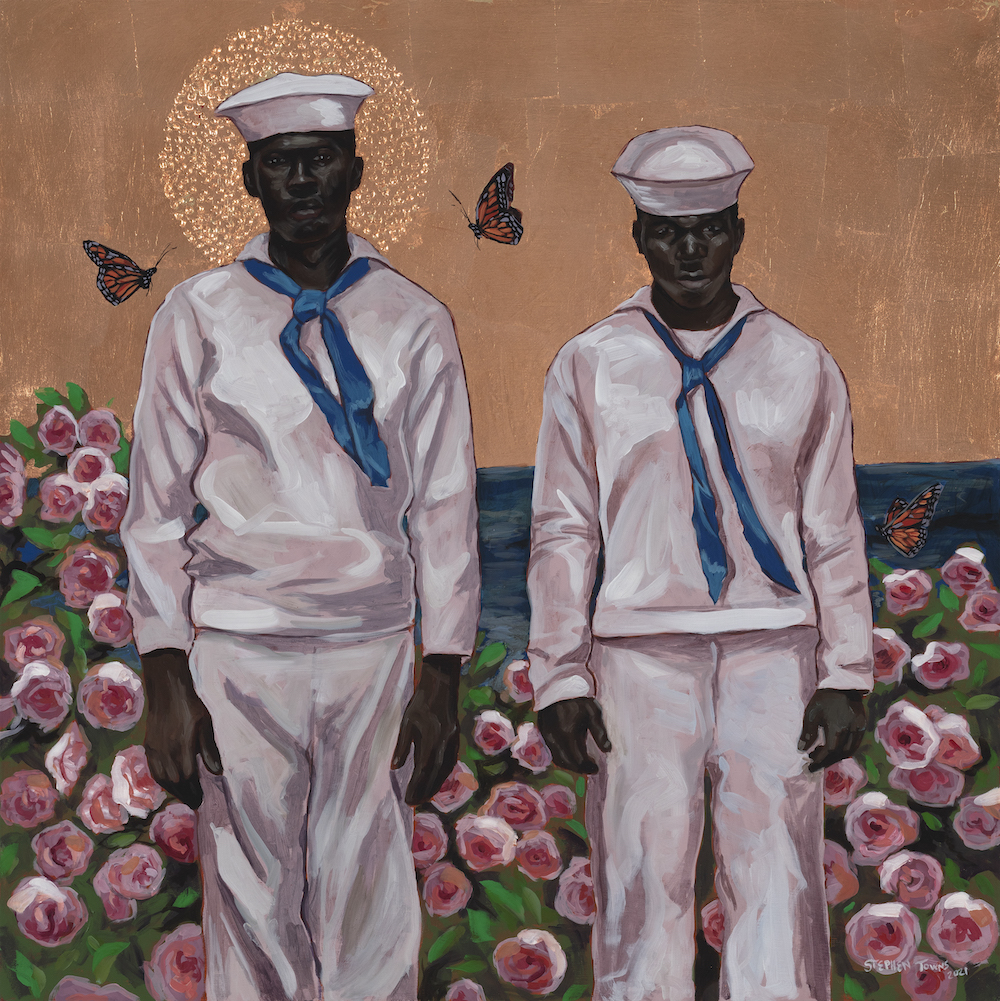 Stephen Towns was born in 1980 in Lincolnville, South Carolina and lives and works in Baltimore. He trained as a painter with a BFA in studio art from the University of South Carolina, and has also developed a rigorous, self-taught quilting practice. In 2018, The Baltimore Museum of Art presented his first museum exhibition, Stephen Towns: Rumination and a Reckoning. His work has been featured in publications such as The New York Times, Artforum, The Washington Post, Hyperallergic, Cultured, Forbes, AFROPUNK, and American Craft. Towns was honored as the inaugural recipient of the 2016 Municipal Art Society of Baltimore Travel Prize, and in 2021, Towns was the first Black Artist in Residence at The Fallingwater Institute, at the Architect Frank Lloyd Wrights’ infamous Fallingwater in Pennsylvania. In 2021 Towns was also awarded the Maryland State Arts Council’s Individual Artist Award. 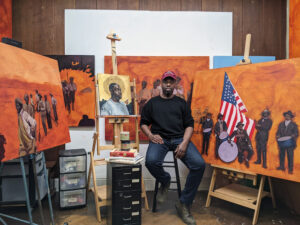 Stephen Towns photographed in his studio by Jermaine Táron Bell.

Kilolo Luckett is a Pittsburgh-based art historian and curator. With over twenty years of experience in arts administration and cultural production, she is committed to elevating the voices of underrepresented visual artists, specifically women and Black and Brown artists. Luckett is founding executive director and chief curator of ALMA|LEWIS (named after abstract artists Alma Thomas and Norman Lewis), an experimental, contemporary art platform for critical thinking, dialogue, and creative expression dedicated to Black culture. She recently served as an Art Commissioner for the City of Pittsburgh’s Art Commission for twelve years. She is also currently writing an authorized biography on Naomi Sims, one of the first Black supermodels. 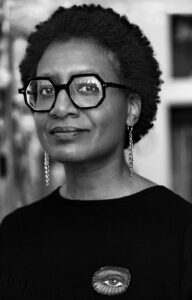 Before or after you view the Stephen Towns: Declaration & Resistance exhibition, you are encouraged to select and explore a text from Stephen Towns and Kilolo Luckett’s suggested book list:

Live from Fallingwater: Stephen Towns and Kilolo Luckett in Conversation

Support for this exhibition has been provided by:

Stephen Towns: Declaration & Resistance is supported by Eden Hall Foundation; Arts, Equity, & Education Fund; De Buck Gallery, the National Endowment for the Arts, and the Hillman Exhibition Fund of The Westmoreland Museum of American Art. This exhibition is completed in partnership with the Rivers of Steel Heritage Area with funding provided in part by a grant from the Pennsylvania Department of Conservation and Natural Resources, Bureau of Recreation and Conservation, Environmental Stewardship Fund, administered by the Rivers of Steel Heritage Corp.